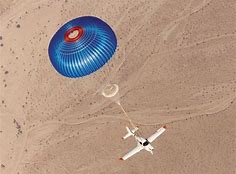 On 31 May 2020, a Cirrus SR22 G-CTAM carried out an emergency landing in the UK, using a parachute attached to the airframe. FR24 records the aircraft took off from Exeter, ditching in the sea off Calshot Hampshire. Both occupants were uninjured. Portsmouth-based Plane Finder also tracked the aircraft as the transponder remained active throughout.

What is Cirrus Airframe Parachute System (CAPS)? It’s described as a whole plane ballistic parachute recovery system available on Cirrus SR20, SR22 and SF50. In collaboration with Ballistic Recovery Services (BRS), it was developed from the GARD system initially released for the Cessna 150. CAPS achieved FAA approval in October 1998. It’s also the only system to gain retrofit approval for Cessna 172 and 182.

What’s the history? A mid-air collision involving one of the Cirrus founders led to its development. Rigorous testing was undertaken to obtain certification. Although the FAA did not require spin tests as part of certification, Cirrus revamped the wing to make it spin resistant. A limited number of spin tests completed in 2004 to satisfy EASA requirements. CAPS remains the only ballistic system used as standard aircraft equipment by an aviation company. The first jet with a ballistic parachute was the Cirrus Vision F50 single engine, where it deploys from the nose, instead of the aft cabin.

How does it work? Pulling a handle in the cockpit activates a small solid fuel rocket to release the parachute from its housing. It’s claimed the rocket accelerates to 100mph in 0.1 seconds. Sensors control how quickly the chute opens. According to the BRS website, it’s easy to install and can be bought outright or financed. Other suitable aircraft include Vans, Kitfox, Ultralight and VTOL. The company claims it has saved 424 lives, with over 35,000 units installed at aircraft build or retrofitted.

Should they be on commercial aircraft? The sheer size and weight of parachute would severely impair the passenger and cargo capability. The founder of BRS is currently looking at installations on aircraft carrying 20 people. The UK CAA remains sceptical, given that commercial aircraft have at least two engines. To safely bring down a B747 with 500 onboard, 21 parachutes would be needed each the size of a football field!